How often do you hear people say things like "I never win the lottery", "It's likely to rain today", "There's a 50:50 chance that our team will win the championship", "If he speeds, he'll probably get caught by the police" and "She always tells the truth"?

All of these comments are in some way related to probability (chance).

The Probability of an event happening is represented from 0 (Never Happens) to 1 (Always happens).

What Probability from 0 to 1 would each of the Following Events Be?

A4. One. Astronomers believe that the Sun is about 4.5 billion years old and is about halfway through its life cycle. It is extremely improbably that the Sun will not shine today. However, if the Sun did explode NOW, you and I would not see it for another 8.3 minutes because this is the time it takes for sunlight to travel from the Sun to the Earth.

A5. Quakes are surprisingly common and this also depends on where you live. The probability is probably more than 0.5 if you live near in a quake area. If not, the chance may be closer to zero.

A6. Close to zero. Pteromerhanophobia is a fear of flying. QANTAS is the only world airline that has never had a fatal jet accident.

Probability of Tossing a Coin

Fair Coin - A fair coin is one which has 2 equal sides, is equally weighted on each side, and has the same chance of landing on each side.

Sample Space - This is all the possible outcomes that can occur. When tossing a coin, the sample space is one head and one tail which is written as H, T

When you add all the Probabilities, they add up to 1.

Probability of Tossing a Six-Sided Die 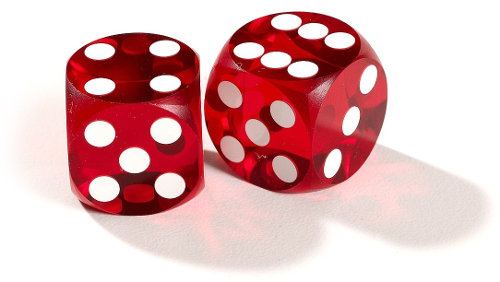 Fair Die - A fair die is one which has 6 equal sides, is equally weighted on each side, and has the same chance of landing on each side.

When you add all the Probabilities, they add up to 1.

What is the probability of throwing an even number on a die?

What is the probability of throwing a number more than 2 on a die?

In a casino game, you will win money if you throw a 3 or an even number on a die. What is the chance of this?

In a casino game, you will win money if you throw a 3 and a 6 on a die. What is the chance of this?

It is impossible to throw both a 3 and a 4 on one toss of a die.

In 2009, Austrian home-owner Traude Daniel had difficulty selling her luxury million-dollar home so she raffled it. There were 9999 tickets sold at $128 each. What is the chance of winning this lottery? Did Traude make enough money?

If I choose one card from a pack of 52 cards, what is the probability of each of the following events occurring?

In the word PROBABILITY, you are to choose one letter. What is the probability that the letter is:

If a fair coin is tossed 200 times, how many heads would be expected to occur?

If a die is thrown 30 times, how many times would a 6 be expected to occur?

In a packet of jelly beans, 1⁄5 are red (my favourite). If I eat a handful of 10 jelly beans (without looking), how many of my favourite red ones should I get?